Old to new | Finding gems amongst the once discarded, with Marie & Anja from Basis Rho

Like colourful suns, fragments of glass float within a galaxy of stones, the flames from their molten creation now trapped within their solid bodies. They seem to glow, like a soft murmur, or memory of their making. Stark and striking they are frozen within their solid frames. Each piece–a once discarded remnant of cathedral windows or famous work of art–is once again celebrated, elevated through a sensitive process of three-dimensional painting.

When I first stumbled across artist duo Anja Langer and Marie Jeschke, their latest collaboration, Basis Rho instantly spoke to me. Fierce in its beauty and feminist in its defiance–their work is a strikingly bold celebration of glass and I knew at once that I wanted to meet them. One week later, as luck would have it, their publicist invited me to their exhibition opening at Direktorenhaus. It seemed like just a matter of time for our paths to cross, and I fell in love with them both as much as I did with their work.

Their pieces are really a story of materiality; artworks that boldly blur the line between art and functionality. Objects that, beyond their function, tell stories of time, of raw material, processes, and childhood play and exploration. They are at the same time a celebration of- and a commentary on their own materiality, as well as a refreshing provocation of a narrow-minded and antiquated art-world.

In celebration of Basis Rho’s latest pieces, Anja, Marie and myself, ventured out to Rädel, to capture the work against the backdrop of a beautifully restored farm house that inspired and informed their current stylistic approach. I loved the concept and wonderful juxtaposition of this vintage time-capsule and the post-modern pieces of Basis Rho. 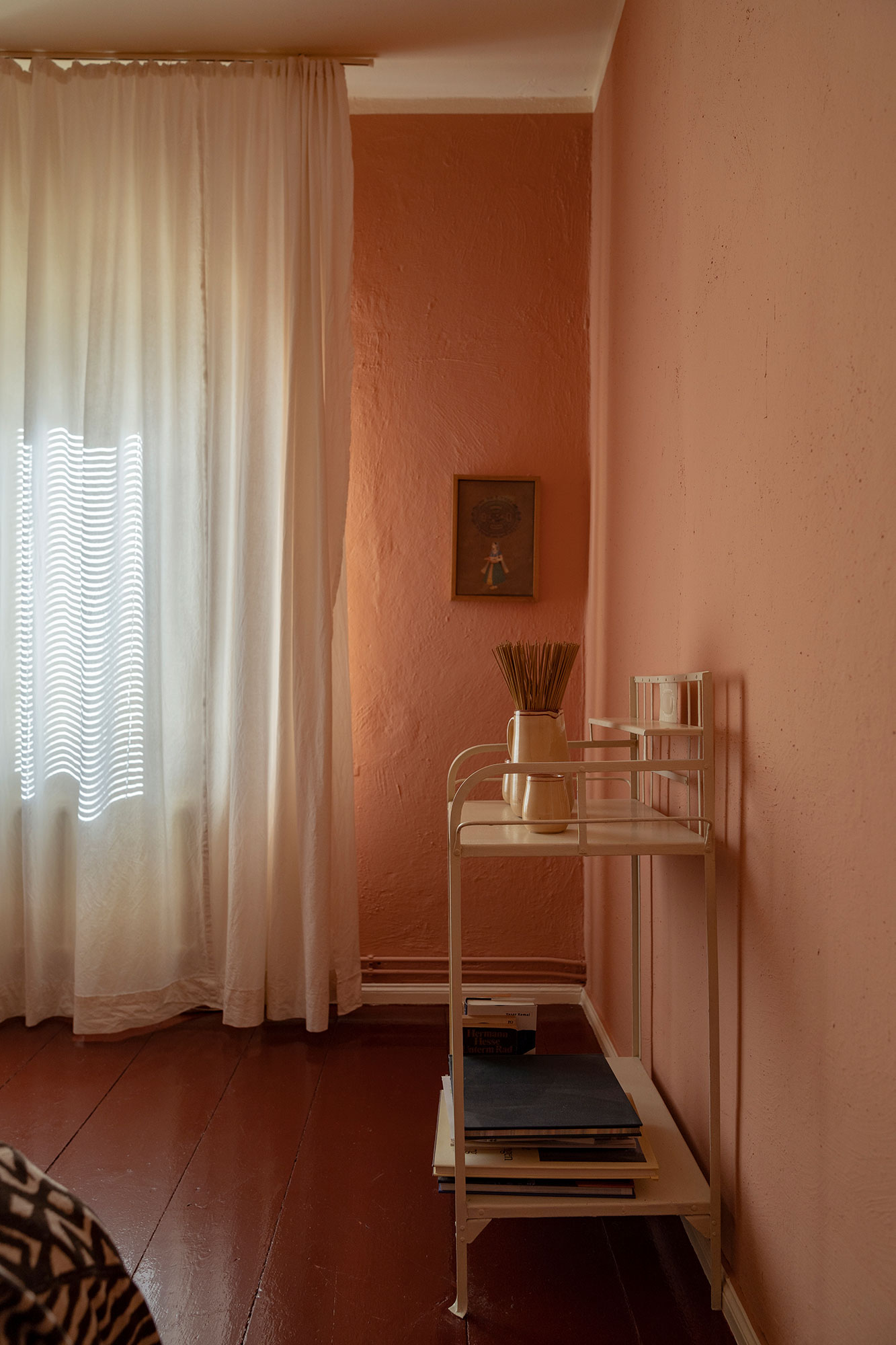 Telling a story of its own history, the home is like a museum of itself–a slice of time, artfully restored with respect and sensitivity to its former days. The huge open plan second story, with its time-worn timber frames, now serves as part office, part gallery, with beautiful antique and contemporary pieces on display throughout the space.

As we moved throughout the house, Marie and Anja shared with me details of the restoration of the historic dwelling and how the interior details inspired their own work, before we delved into their creative process and obsession with glass.

Few materials are quite as complex and dualistic as glass. A translucent solid, it is extremely strong, yet utterly fragile. A broken, jagged edge of an invitingly smooth pane can be life-threatening. The medium itself seems to blur the boundaries of its own material qualities. How did you come to work with glass? What lead you to explore the possibilities of this material and how has it influenced your approach, process and outcomes?

“We are thrilled that you immediately mention the beguiling ambivalences of the material glass. We came across the material in 2016, through an instinctive choice. At that time we had created hybrid glass works of art for an exhibition, which were office furniture, object and painting at the same time.  After working on the first series, we could not get away from this material, because of its versatility, its presence and above all, its omnipresence. From its creation in the old glassworks to the constantly touched glass displays of our smartphones, this material connects so many different realities with each other. For us, it really is the material of the present.”

“When we realized that glass also possesses maximum symbolic power for the topic of transparency, we were once again convinced that we should deal with glass. There are so many blind-spots in our society, so many machinations that have not yet been exposed. In material development alone, many facts about production processes, ingredients, techniques, employees, etc. remain hidden. It is time to show ourselves; it’s the only way we as a society can once again act in solidarity with- and learn from each other.” 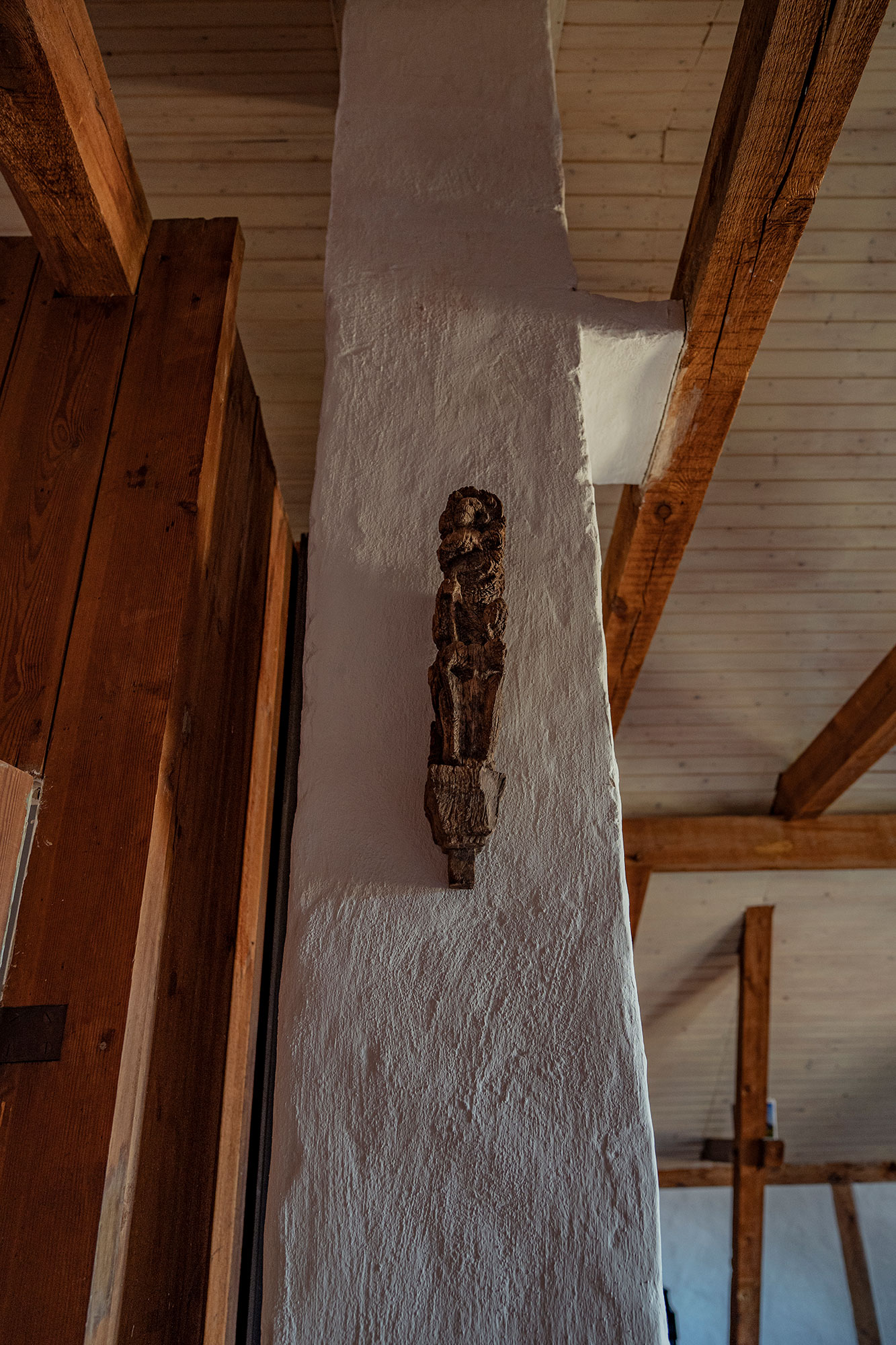 Similar to your medium, you both you are now also blurring the boundaries between art and functional design. What has been your biggest challenge and your greatest achievement throughout this process and Basis Rho journey?

“For us, it was incredibly exciting as visual artists to develop a fully functional artistic material from the remnants of other artists and architects. When we first introduced Basis Rho to the public earlier this year, it was a really exciting moment for us. The launch took place at the Surface Design Show in London–a trade fair for high quality architectural surface materials.”

“How do we remain visible as artists now that we are also material suppliers? These were very important questions back then. These existential questions have sharpened our view of an inclusive future society even more. Why should we choose when we can have all these identities at the same time. Back then, that was already a really important insight for us. A few days ago, we received the news that Basis Rho has been awarded the Material Prize 2020–something we did not at all expect.” 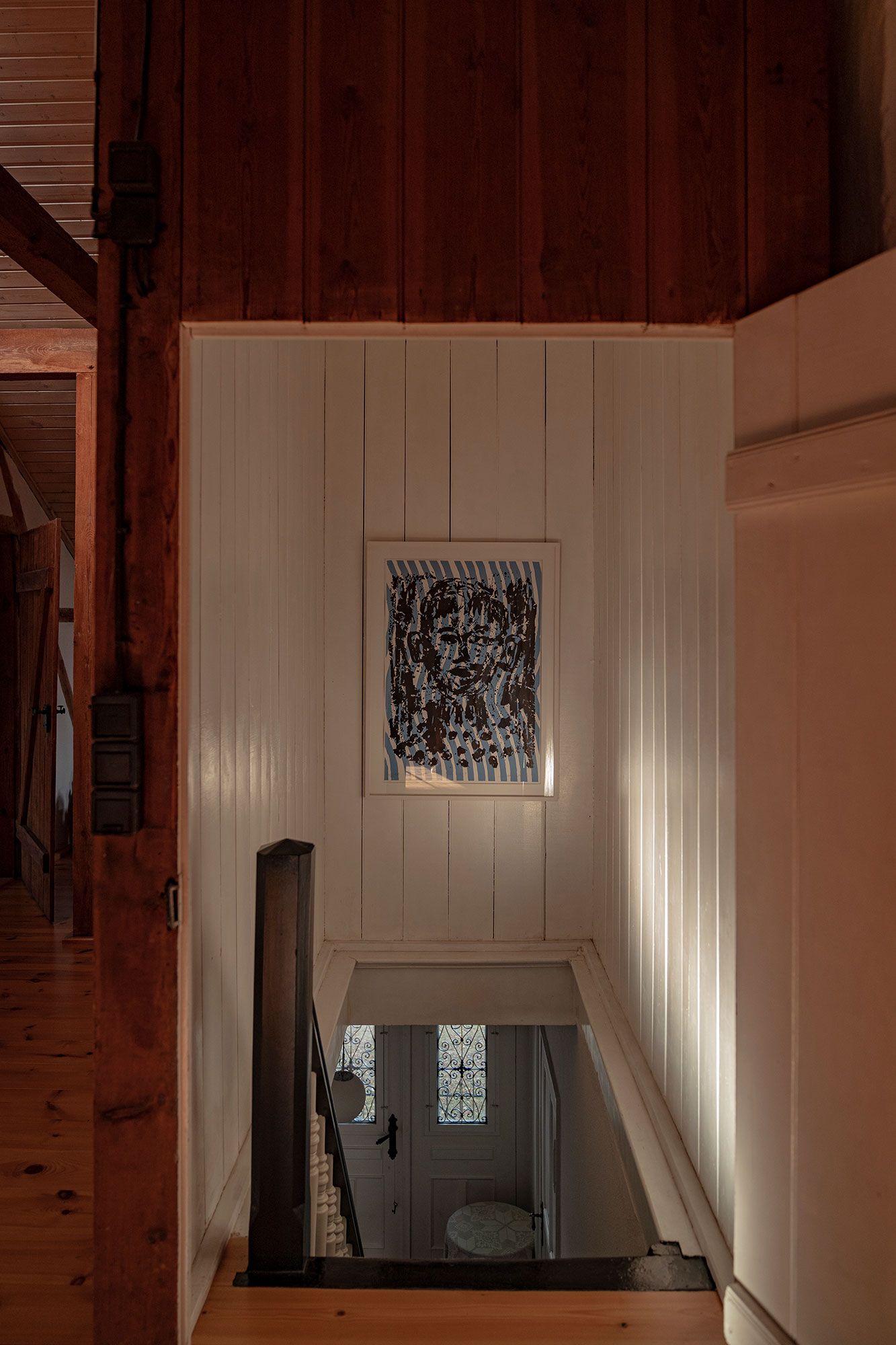 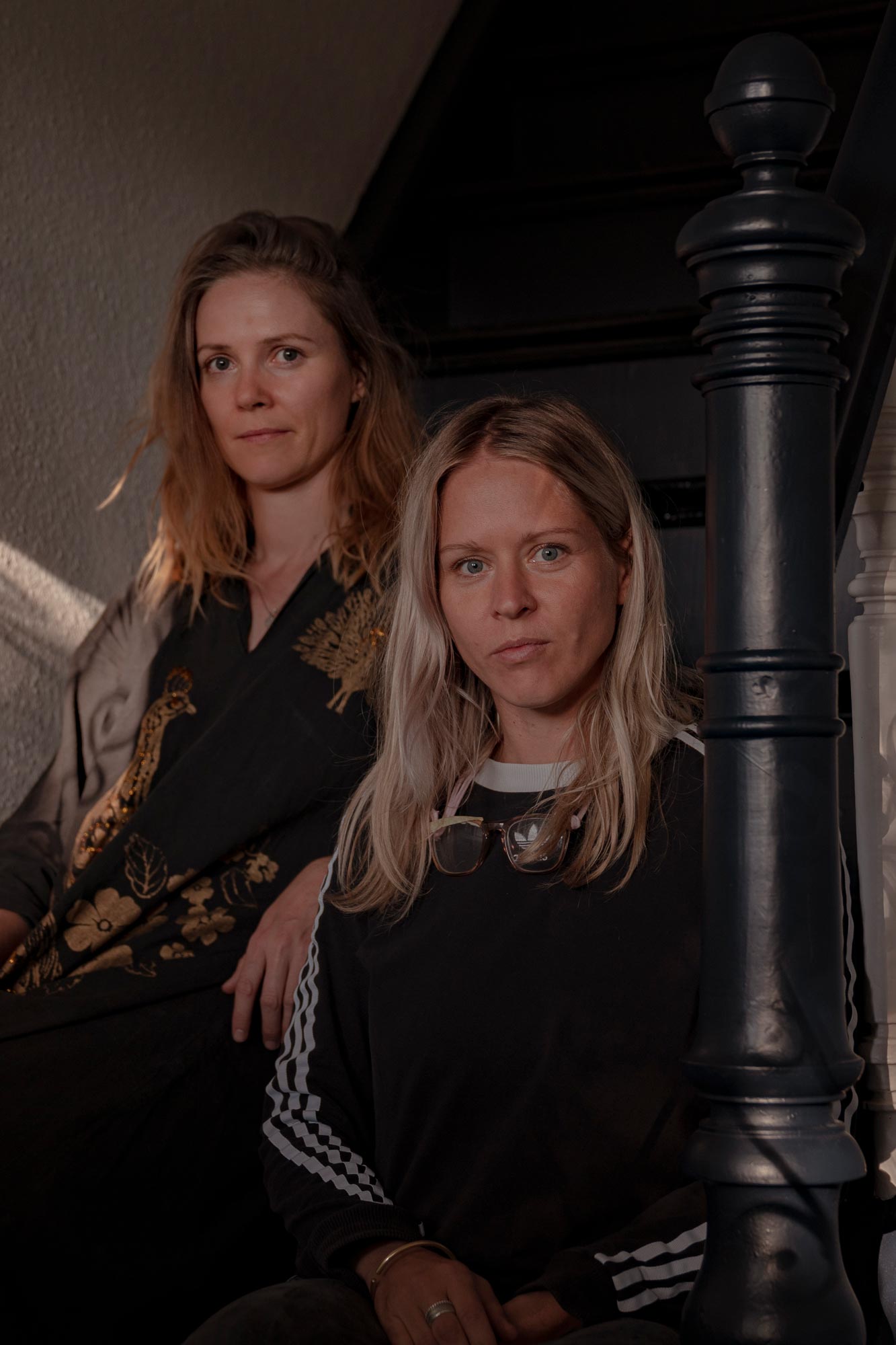 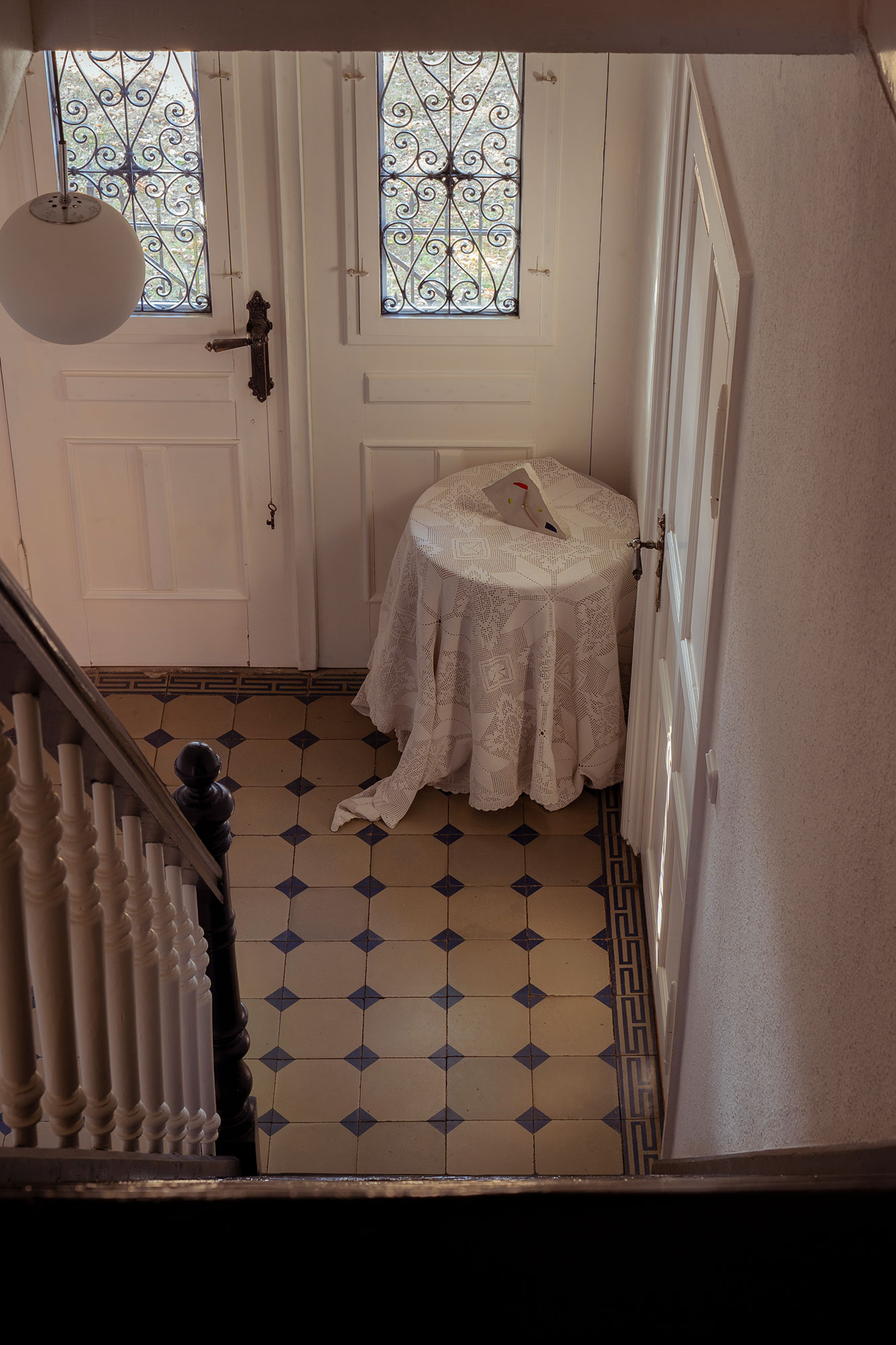 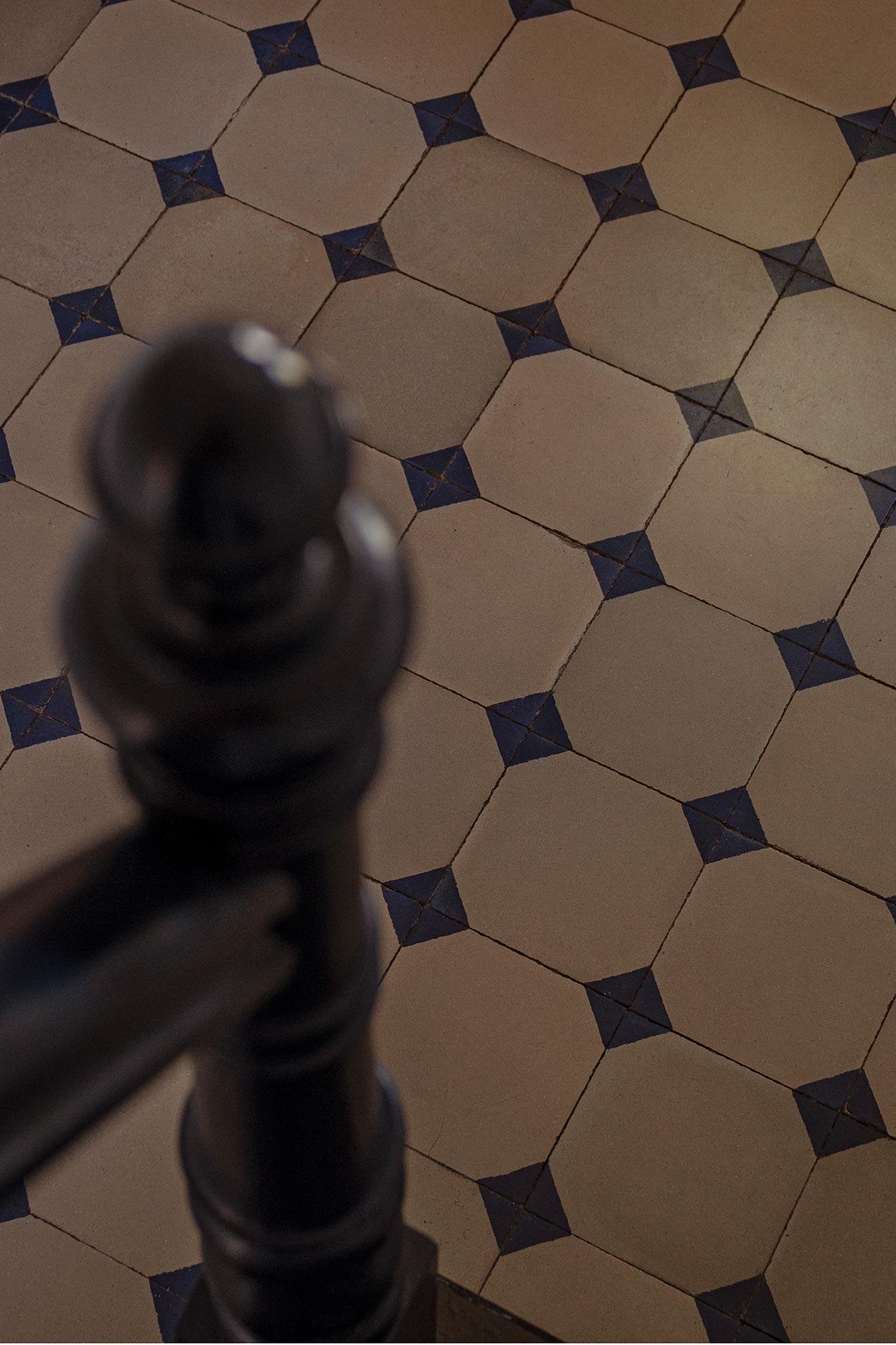 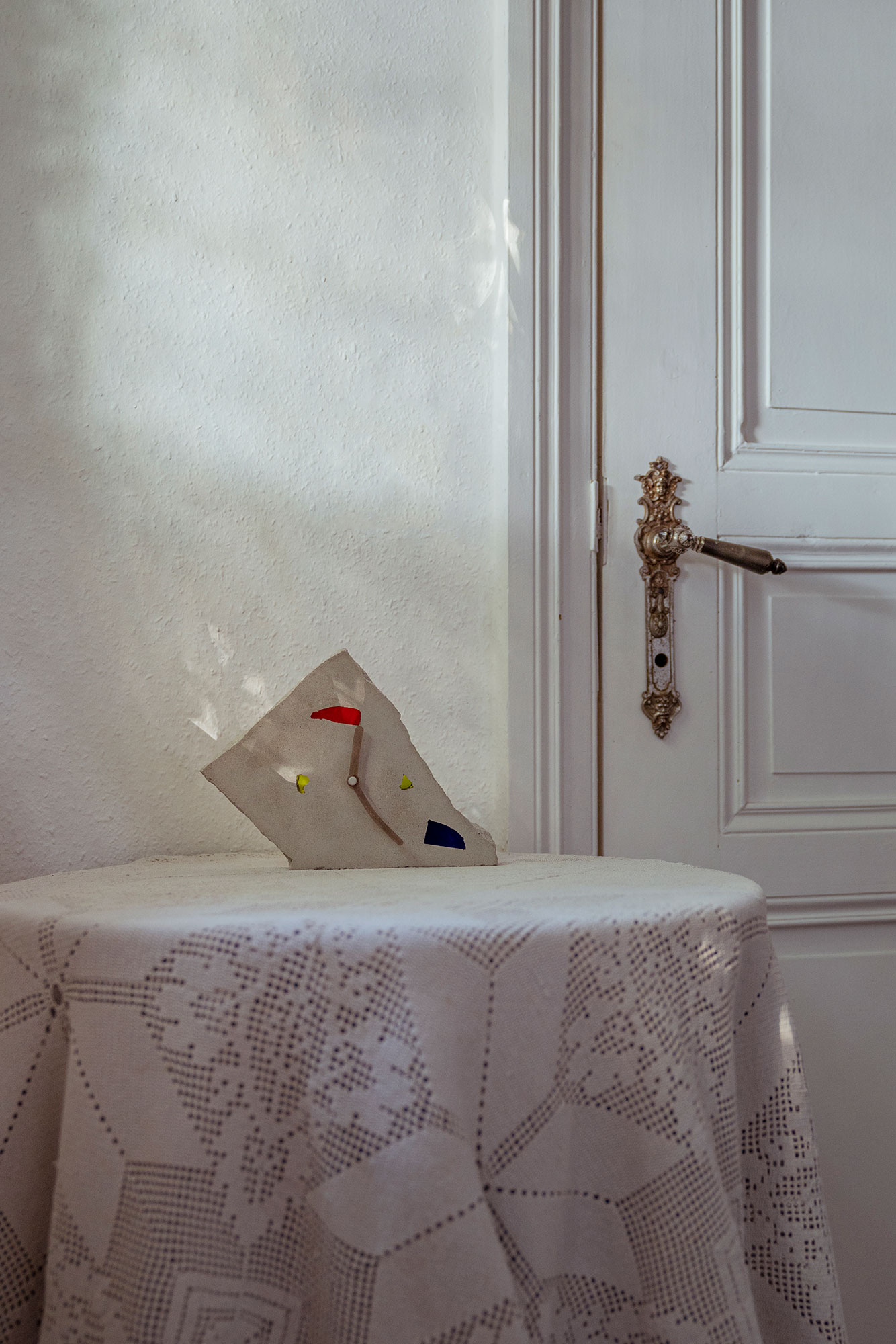 I would imagine that as an artists, building up a name and an identity around one’s work is quite a complex process. How does that change when your work becomes collaborative, as in your duality, as well as the collaboration between the producers of your Basis Rho products? Can you tell me a little more about your concept of ‘shared authorship aesthetics’?

“The experiences we had as a duo in 2016 and 2017 were very special. Our individual working practices (Anja painter / Marie mixed media artist) dissolved in the common work. We could no longer understand who had made which decision. Everything merged and took on its own identity. At first, we were so astonished by what we had developed together that it almost seemed strange to us. This thought: ‘this work of art is not by us at all!, fascinated us very much. We learned how wonderfully liberating and sustainable this way of working is. We quickly involved other people in the process. These were other artists, dancers, performers, scientists, filmmakers, chefs, etc. The important thing was that the two of us didn’t give any clear vision of the final result, it was more a kind of guiding the co-working. Everyone got involved in their own way and all the individual parts blurred into a big whole.”

“We call this big whole; the sum of all parts involved in the creation of a thought/object/action, new models of shared authorship aesthetics.”

“Shared authorships are nothing new, but how to make them visible, how to depict them; we see this as an important field of research. Basis Rho involves so many other authors, too. That fascinates us.” 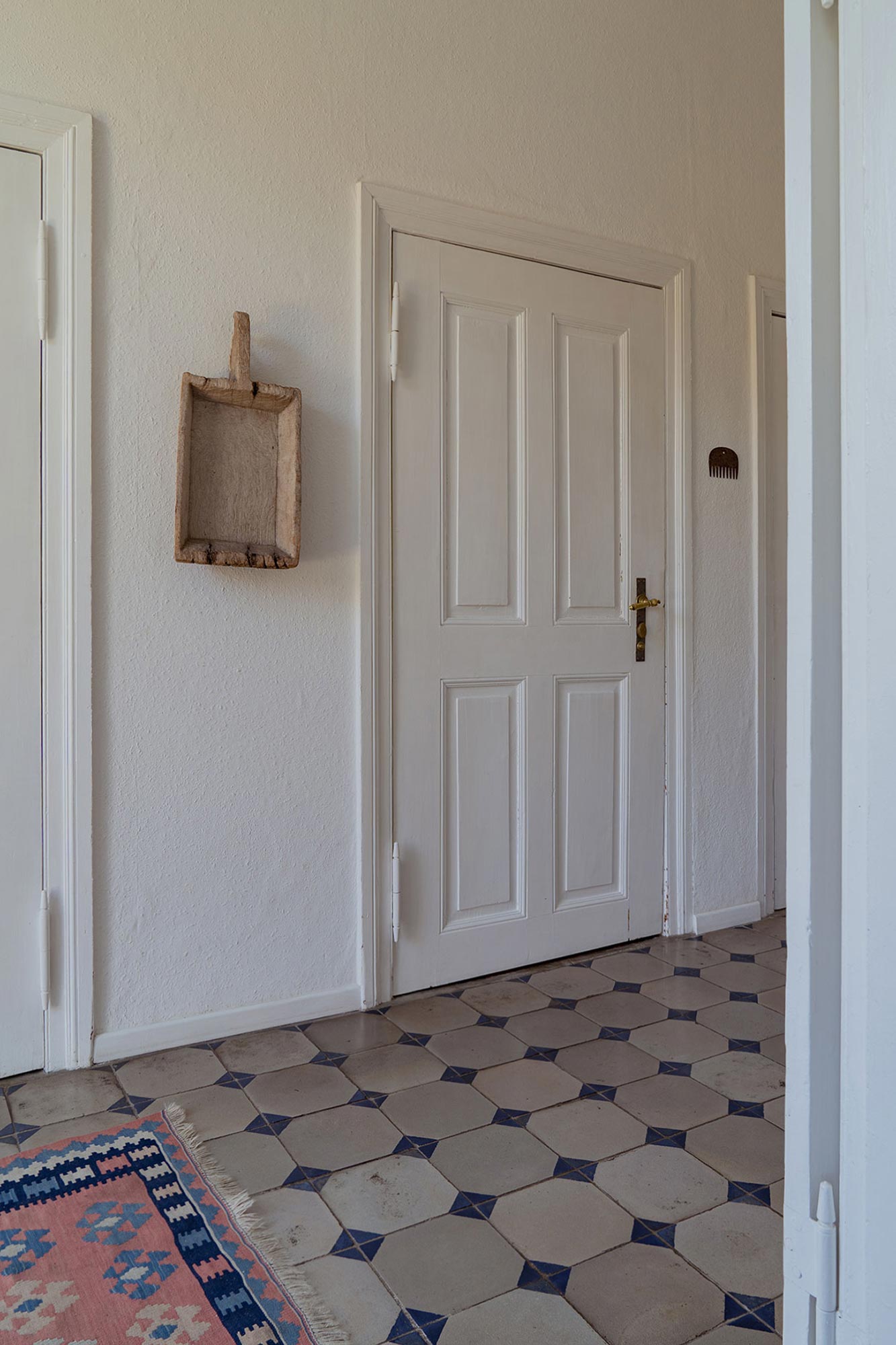 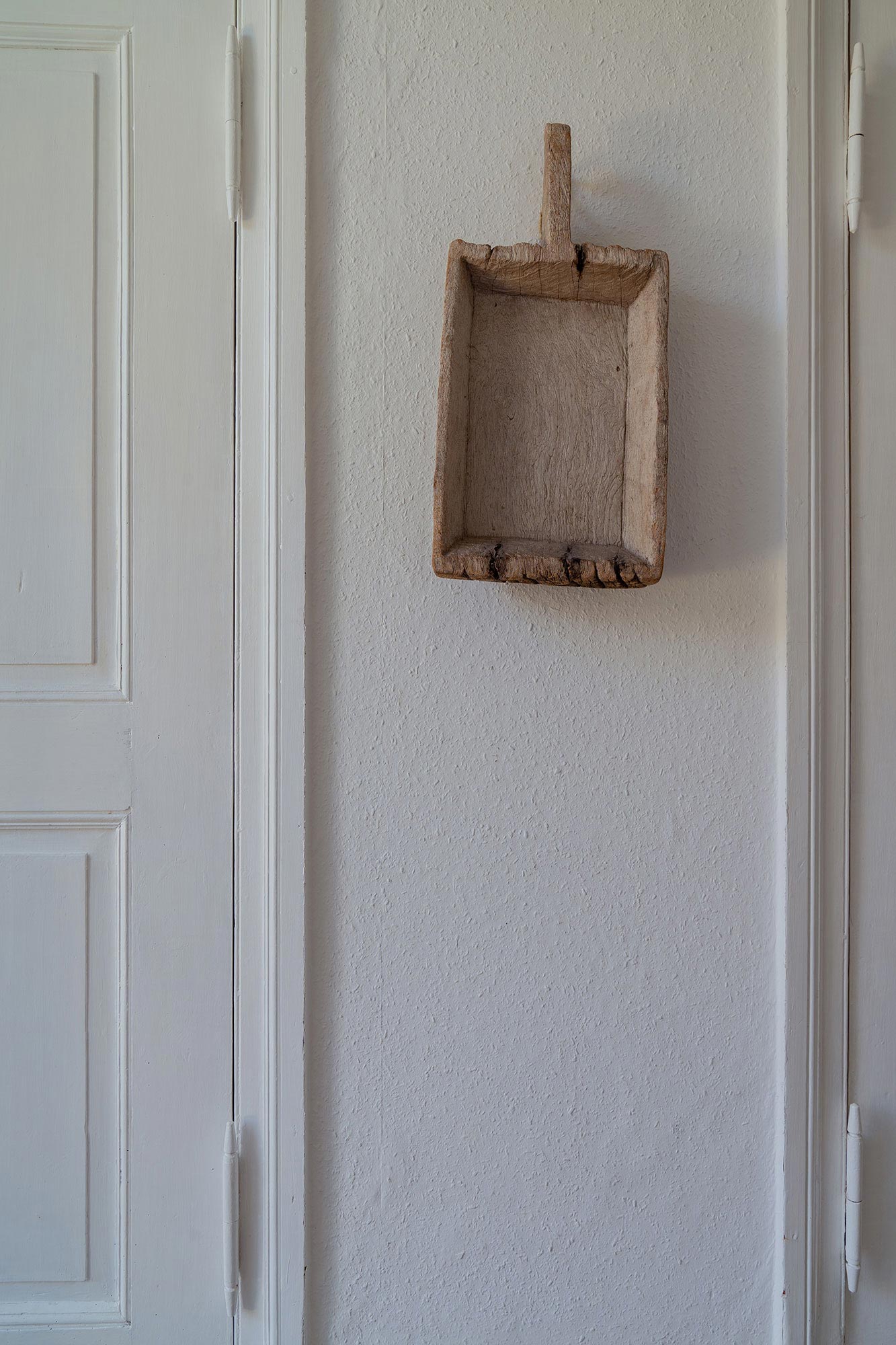 As a child I used to be captivated by marbles. I could stare at it for hours, turning it over and over, transfixed, it transported me into worlds of make belief and magic. I look at your surfaces and it stirs up that same enchantment. Does it have a similar effect on you? Where does the allure of your pieces take you?

“We haven’t thought about these glass marbles for ages. The comparison is really apt–especially because they connect the played reality and the seemingly adult, rational reality. When we discovered the tons of glass in the first glassworks, we felt the same way. We were so fascinated by them that we took them with us and experimented with them in the studio. They were like gemstones–pieces from another world. We thought of mythical creatures and future organisms that produce or break down these magical glass stones. For us, the view into the Basis Rho surface is similar to the Rabbit Hole in Alice in Wonderland. This immersion blurs the line between reality and fiction.” 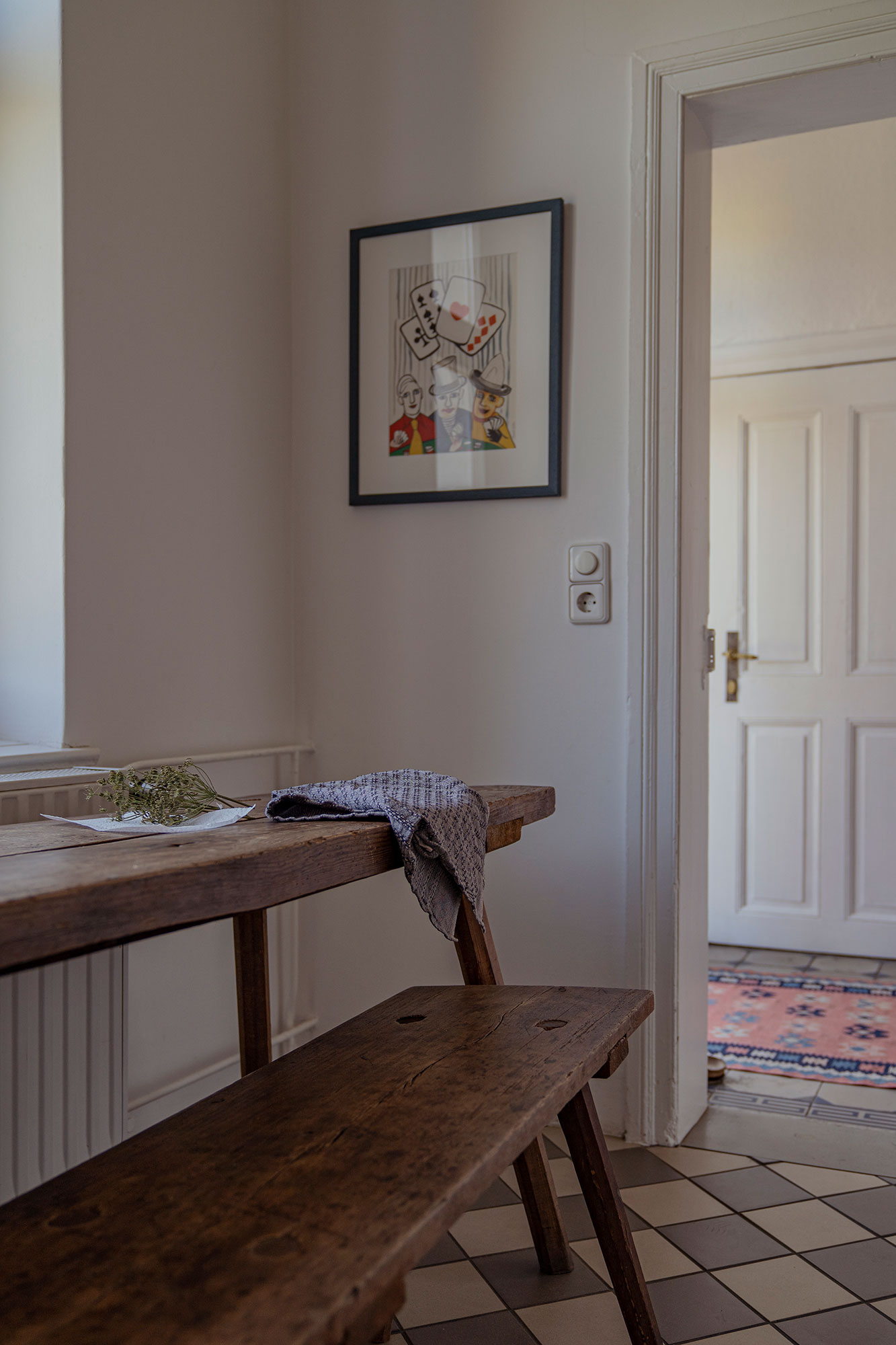 What inspired you to make AKNTA, the beautiful timepieces available as your collectibles?

“In no other year has the man-made calculation of time been so relative as in this one. Suddenly, millions of clock hands worldwide are somehow rotating more slowly or distorted. It is–as if out of the blue–a very own time calculation had begun. The demand for the empowerment to regain one’s own time or sense of time, led us to make a clock.”

“The AKNTA is more than just a timepiece, it is a symbol for the omnipresent fragility of people and the world. Each AKNTA is a unique specimen.”

“For the shape of our clock, we have been researching for a long time. Originally, we wanted to give this 2020-symbol a much smoother contour line. But somehow this form did not reflect what we felt about the present situation. Basis Rho is made using the old hand-casting method, and we have always cast rectangular floor and wall slabs and tiles. At some point we made the decision to smash some of our slabs; to deconstruct them. We studied the shards for a long time and chose a shard-form that could stand on its own or be hung on the wall.”

Since its fairly recent inception, Basis Rho has already received numerous accolades and commendations. What are your future goals? Where can we expect to see you go next?

“Until now, we have realized single requests such as the production of tables or objects from Basis Rho and have made many collectors happy in their private homes. The next step, and thus our goal for 2021, would be to be able to design a complete interior, i.e. walls, floor, and the interior design from Basis Rho in a public place. That could be a museum, a foyer, a bar etc. and we would love to have it in our home town Berlin.”

“In January will be contributing to a seminar at an art academy in Shanghai on the topic of self-marketing as an artist and have already started planning a research project with the Bundesanstalt für Materialforschung (BAM) where we will conduct interdisciplinary research on new, sustainably produced additives as an alternative to cement. In addition, we are currently working with a London curator on an exhibition to be displayed in a gallery for contemporary art in Munich in spring 2021. The exhibition will focus on the theme of rest and memory. “

Energized by stories from creators?

Sign up to the newsletter for inspirational conversations with founders & creatives in their spaces. 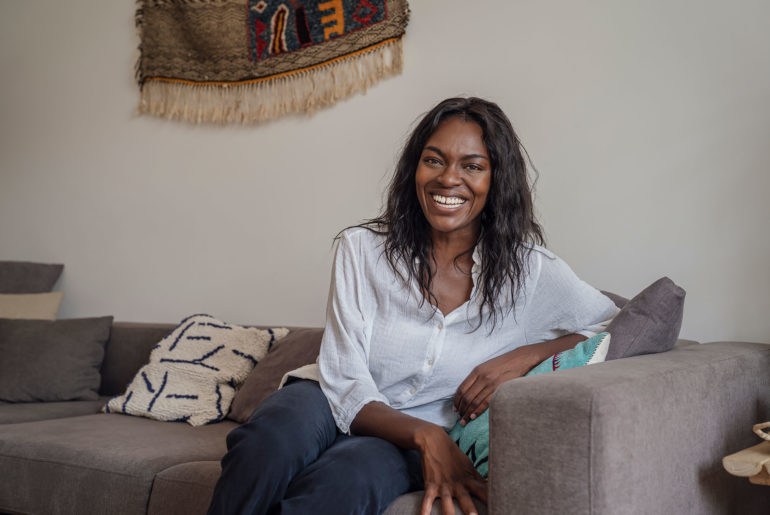 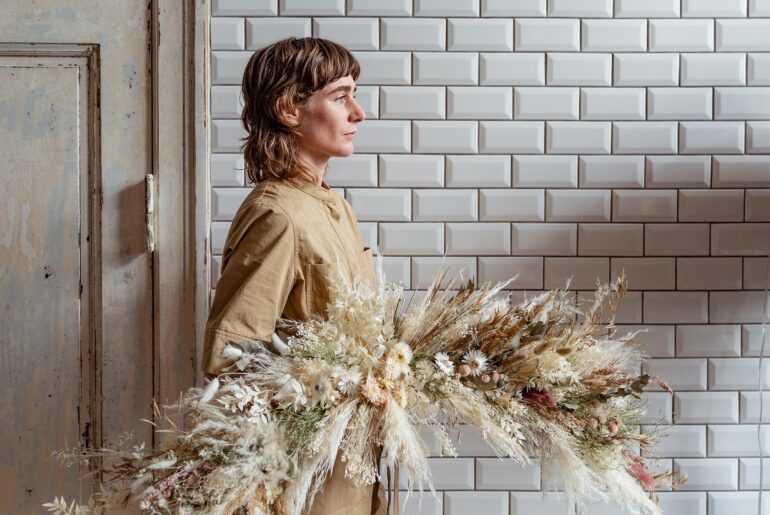 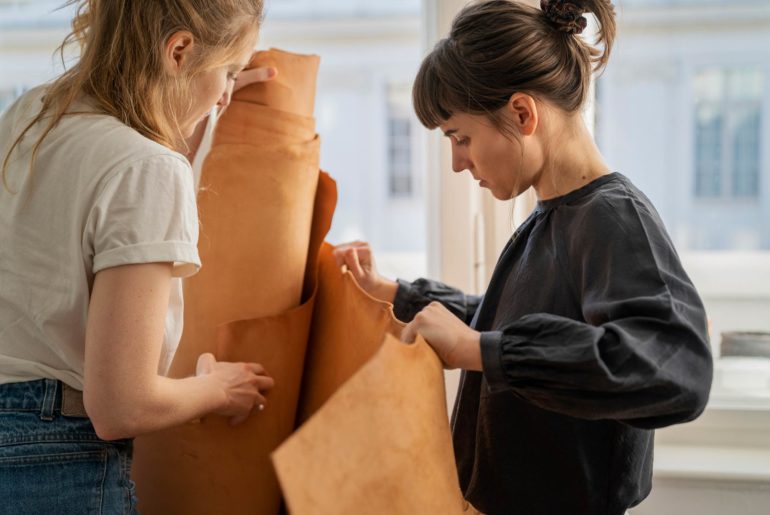